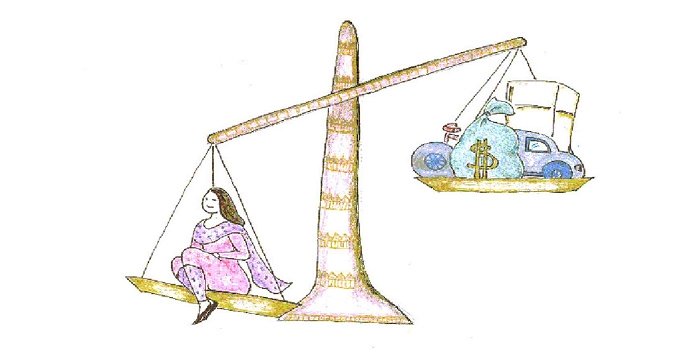 This is a story of a middle class girl who faced a situation which no girl should ever face. Mrs. Shobha was a middle class girl from New Delhi. Shobha’s parents worked hard to save and to provide her a good education, she being their only child. But the situation in India is that weddings are the biggest National passion, much greater than cricket or cinema.

The parents started to save money for their only girl child for her wedding. Shobha and her father’s family friend’s son were of the same age so they thought now is the time that the talk should happen. So Shobha and her fiance had their first meet, according to the arranged marriage tradition and then in the subsequent meetings, they got pretty comfortable with each other as they traveled together and met frequently to know each other.

In the beginning, everything seemed fine and the boy too was a well settled guy, being an IT professional and having a decent earning in the US, Shobha’s family including herself agreed to the marriage proposal. A few days later when the wedding cards were all set to be distributed, Shobha’s father got a call from her fiance’s father saying that they demand a few expensive jewelry kits in the form of gifts. Shobha’s father agreed to it and didn’t give a second thought. A few days before the marriage ceremony, the fiance’s father again called and now they asked for a car, some furniture, a bunch of sarees and some expensive jewelry. Shobha’s father couldn’t say no as the marriage ceremony was just round the corner and all the preparations were almost done.

Just before the marriage could take place, Shobha’s father was now threatened and demanded of a gold chain for fiance’s father otherwise they threatened to cancel the marriage. Shobha’s father again ran all over hiding his face, arranged some money and bought a gold chain for the father. The ceremony happened as expected. The guests were all happy as they were unaware of these events.

Shobha and her husband took off for the US. A few days later, her father-in-law called her father asking for some money to be transferred to buy a car and some furniture for their apartment in the US. Again somehow the finances were arranged and the demand was fulfilled. Till then, Shobha’s husband used to torture her and beat her on a daily basis as he now wanted her family’s house in India to be surrendered to him. This part Shobha couldn’t tell her mother and father as she was completely broken from inside and she knew they will get depressed for their entire lives if they come to know about this happening.

One day he came at home late at night, packed all the stuff he could, tortured her by beating and hitting hard on her head, locked the door from the outside and was left in a blink. Shobha, being alone and trapped without any food and water in those extreme cold conditions, called her husband day and night, and literally begged him to come home and at least leave her some food, but all in vain. After three to four days, she got completely tired and doomed from inside and in that tremendous physical pain she somehow managed to call the Women Services Center and told them that she had no money for her treatment, but the thing they did will shock you as they said that, ‘Mam you don’t worry about the money as our team will be reaching there anytime soon as you are much more important to us than anything else at this moment’.

On a completely foreign land, a foreign woman helps a girl stranded for her life, and her own family couldn’t do anything is a reality filled with shame and agony.

Dowry is a very serious crime in India which is slowly fading away. That being said, such cases used to happen almost on a daily basis which destroyed many lives and thus strict laws came into place. The solution is not easy as it seems as this is a very deep rooted problem of mentality and cultural identity which is being used to rob and extract as much money as the families can under the name of this ceremony called marriage.

One Reply to “The disturbing story of a ‘Dowry’ and a reality check.”